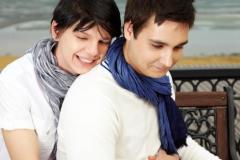 Some people celebrate Valentine’s Day, and others think it’s just a commercial farce. Whatever way you look at it, this might be a good time to think about the work that you are putting into your relationship every day of the year.

Research by Relationships Australia and the Australian National University has shown that couples who participate in relationship education courses are more likely to be happier in their relationships, find it easier to communicate their concerns, and deal with conflict.

Relationships Australia offers a range of courses throughout the year, including Building Better Relationships. It's for couples of all ages, stages and sexuality. Facilitator, Sue Wilson, shares her experience of the course’s success.

“One couple recently (let's call them Val and Terry) made us all laugh at the last session of the six-week course. Val said, "This course has been much better than counselling." Terry said, "But you've never been to counselling in your life!"

I love the fact that the groups have fun and grow to trust each other (within the bounds of strict confidentiality, of course.) The facilitators make sure that participants feel at ease but also challenged to make the changes they choose in their lives. And we keep the groups to a maximum of seven couples so it's all quite interactive.

One of the topics is the "five languages of love." In their quiet couple sharing during this session, Val and Terry listened generously to each other and discovered they had very different "love languages." Val often left little cards all over the house, expressing her love for Terry. Now it became clear that Terry felt embarrassed by these cards. So instead Val began to do something that Terry had been longing for – a simple cup of tea in bed in the mornings! And Terry made a point of saying thank you and leaving her an occasional card! Val said to me, "Suddenly I felt loved again."

They're not the only couple who find that simply listening to each other is the most important step in healing or building a relationship. As the Australian researcher Hugh Mackay has said, in The Good Listener, "Listening is an act of courage, generosity and patience." Terry demonstrated that speaking honestly about your own feelings and needs is also important. Terry said to Val, "I want to listen well, and yet I get tired and confused by too many words. I need to take a break after twenty minutes." So that became a helpful guideline for both of them.

In fact, we invite all the couples to draw up their own guidelines for Conflict Resolution. These often become known as the couple's own Fighting Rules! Terry and Val wrote four key things for their behaviour and put them up on their fridge: "Notice when Val 'demands' and Terry 'withdraws.' Take time out when either of us gets angry. Both of us calm ourselves until we can talk sensibly. Have a hug that lasts for more than seven seconds." Their friends saw the "Fighting Rules" on their fridge, and they all had a chat about their relationships - first time they had ever opened up such an intimate exchange.

This couple's evaluation at the end of the course included a lovely comment: "We came to the course believing that our long marriage was probably not worth the effort that we thought we were putting into it. Now we seem to have a bright future together.” “

If you'd like to attend a Building Better Relationships course for couples, they are running throughout the year at Relationships Australia Spring Hill (and some other venues around Queensland.)

The courses typically run over six consecutive evenings, from 6pm–8.30pm. Cost is currently $110 per person, per course.

At Spring Hill, the start dates of the next courses are:

Please phone 1300 364 277 to find out more about what Relationships Australia has to offer you, in your own area.